My first time – I had a great ride, even though I am slow. I hung back at the start, so as not to get in the way of the ballers, and by the time cxagent and I and a few others hit 183, we were alone. A very quiet ride down to Zilker! We caught up with or passed a few people on the way through the Green Belt, and went up the HOL with another group – guy with a green helmet and a sweet Ibis Ripley. The ride up 360 was uneventful, and we stopped for a few minutes at the French Crepe stop, since they had gone to the trouble of setting it all up.

On to City Park where the most ravishing, smoking-hot, red-headed trail angel (my wife) awaited me with an ice-cold Lone Star and a handful of Ibuprofen. I was pretty much toward the back at this point, but still having fun. I parted ways with cxagent, my buddy from Dallass dropped out, and I rode out from CP with a group of girls (the Austin ones, not the Houston ones), and made it through the light ahead of them, so I slogged up Jester (94.3 F) alone. Made it to St Ed’s without difficulty, and while navigating it correctly I came across Unsub1 and his buddy heading up it backward – talk about a workout!

Onward up Yaupon, also at 94.3 F. I ran into Cooper and Austin Bike, both looking like death warmed up, coming out of Thumper. Losing the will to live, I headed on in with Unsub1 and his buddy. True to form, it was utterly miserable. We cussed it a lot, and the sole came off my shoe. After Thumper I stopped for yet another ice cold Lone Star and some potions from the temptresses. The boom box was playing Hot Chocolate’s ‘You Sexy Thing’, so I did some strip teasing for the temptresses, and impressed them mightily with my manly physique. I swear I saw tears in Spinnin Cinn and Sex Panther’s eyes.

At this point I’d been out for 11 hours, so I booked it down Parmer, did the Inner Log Loop at Walnut and ran into Jeff Shoemake and his crew (the aforementioned ‘girls from Houston’). That man is fast! I showed them the big downhill and the Wall, and we all rolled on in — I made it in daylight! I threw away my shoes, and started in on a growler of Pinthouse IPA. 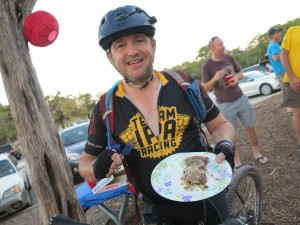 All in all a great time, Thumper fucking sucks, and I’m glad I did it. Next year – backwards on a singlespeed!