A recent study by some Austrian scientists found that if you are a fan of IPA, you’re more likely to be psycho.   That could explain why four members of Team IPA decided to ride 150 miles across West Texas in July participating in the Cactus and Crude MS150.  Tate Drysdale, Marlon Miller, Shea Webb and Kyle Olson were part of an eight person team from Randy’s Bike and Run, their local bike shop in San Angelo Texas.
The real reason for doing this ride to raise funds for the National Multiple Sclerosis Society.  Kyle’s wife Nancy has MS, and all the riders know at least one person who is also suffering from this disease.  Our team raised over $5000 for the NMSS, the money will be used for research into treatments for the disease as well as for assistance programs for people suffering from MS.
The ride started Saturday morning in Midland, TX.  It was surprisingly cool at the start, but it does not stay cool in West Texas in July and temps topped out in the triple digits both days.  Day one’s route left Midland heading east, then turned north with a stretch of almost 50 miles that was nearly straight down wind.  That made for easier pedaling, but when you ride with the wind at your back, you lose just about all of its cooling effects.  Making those downwind turns felt like the temps went up 20-30 degrees immediately.   This ride is extremely well supported and there are well-stocked rest stops every 10 – 12 miles.  There are so many volunteers supporting the ride that most rest stops have so many volunteers, they will actually hold your bike for you while you refill your bottles or get a snack.
Day one finished in Lamesa, TX where fajitas were served for lunch.   Saturday night there was a pasta dinner and some of the top fundraising individuals and teams were recognized.  Day two started bright and early in Lamesa with breakfast catered by the local McDonalds.  Day two continued mostly down wind but with a few stretches that turned east into the wind.  Shea did a great job pulling  most of the way across the longest stretch making it a little easier on Tate and Kyle who tried to stay in the slipstream as much as possible.  Marlon was miles ahead, he finished well ahead of the others both days but all the riders were safely off the road by noon each day.  The overall route is pretty flat, and scenery is a little lacking, unless you really like a nice cotton field.
The ride finished at the Caprock Winery in Lubbock, TX.  Riders were served up snow cones, brisket tacos, and lots of cold drinks.  There was even free beet which was nice, but the selection was definitely not Team IPA approved.
The team could not have done the ride without great support from their families.  Marlon’s wife Joy, Tate’s wife Cheri and Shea’s wife Shannon all helped deal with the logistics involved in a ride that started two hours from home and ended two days later 3 hours from home.Kyle’s wife Nancy was with the riders in spirit.   A big thank you is owed to them for all the help they provided.
More information about the ride can be found here:  Cactus and Crude MS150 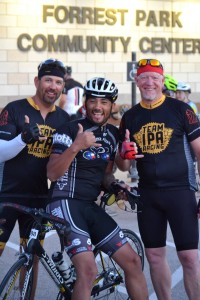 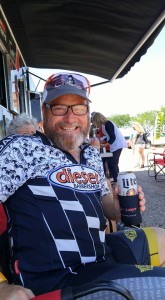 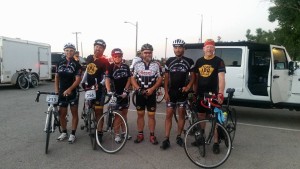